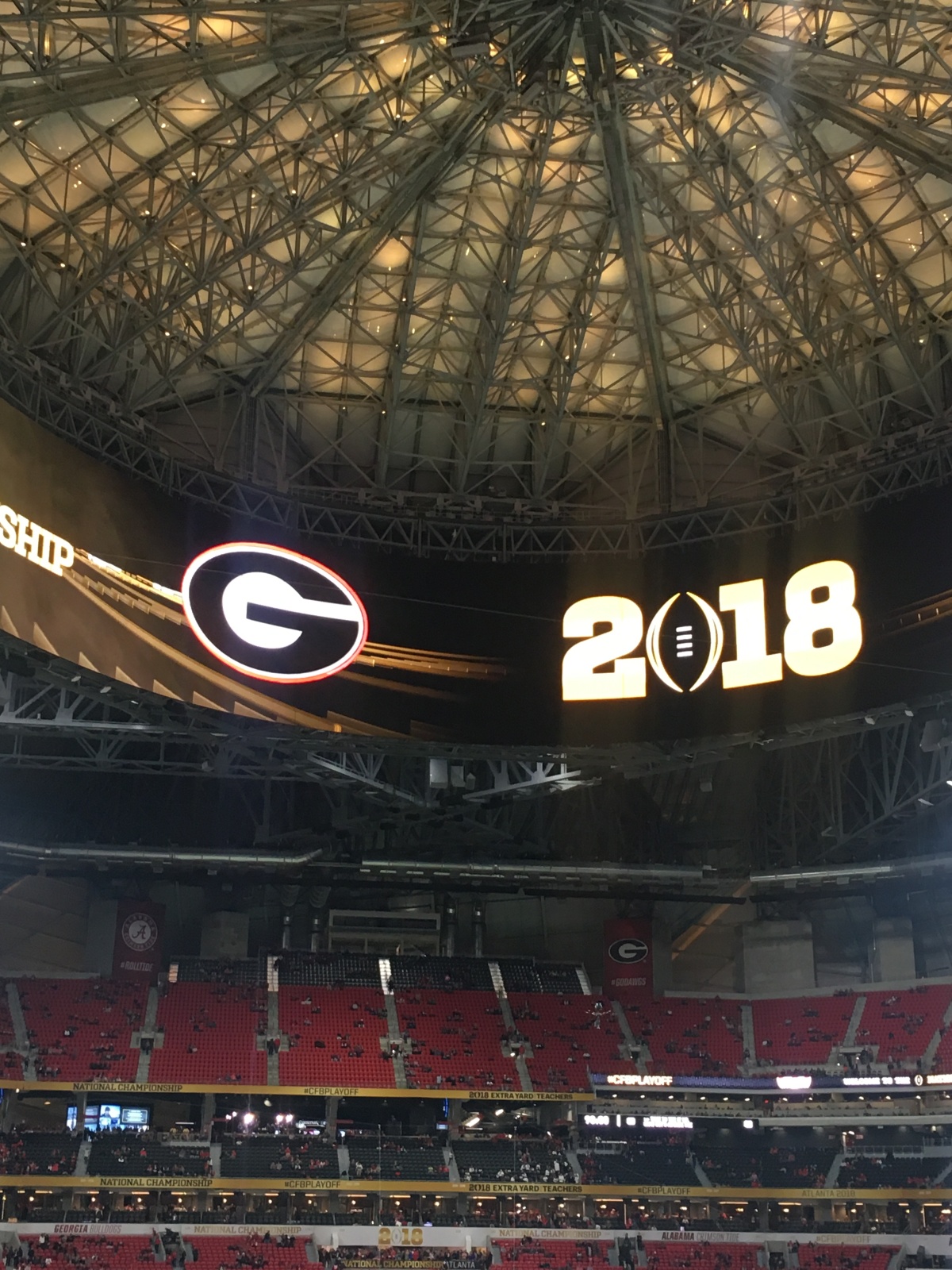 I am from Athens, Georgia.  I am a-long time fan of the Dawgs and an alumna of the University of Georgia.  I have been going to Georgia football games since I was five years old.  Back in December, I was blessed by oldest son, Brayden, with 3 tickets to the 2017 South Eastern Conference Championship.  I took my very best friends from college, Pam Worsham and Bobbe Gillis. 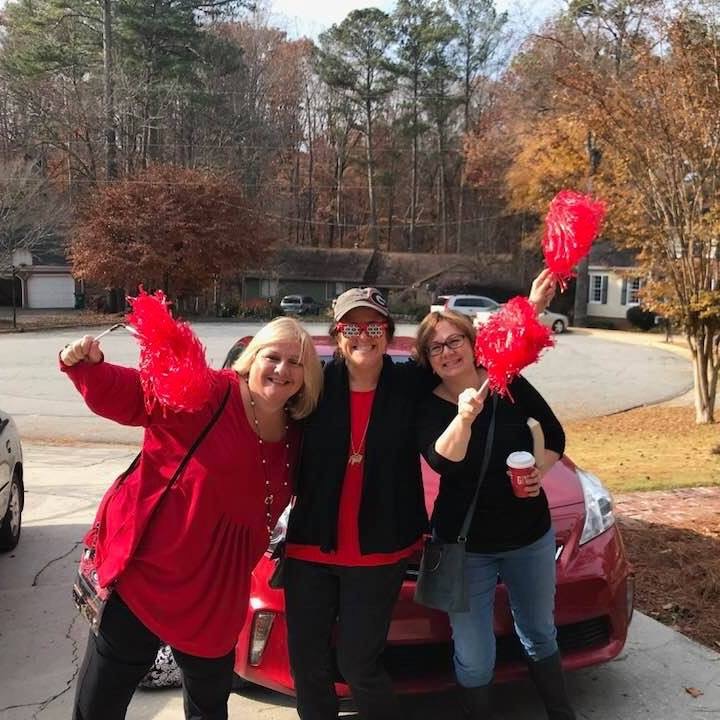 My ‘dawgs upset the Auburn Tigers and advanced to the College Football Playoff Semi-Final at the Rose Bowl.

When I returned home from that game on Monday night, I ate something and got food poisoning for the first time in my life.  It was horrible.  I was up all night.  I was very, very, sick.  To be honest, I was not in my right mind.  After being up all night and day, my husband called and asked if I wanted to go to the Rose Bowl.  An old friend who manages a travel agency had asked him prior to the SEC championship to help with a travel group that she would be taking to the Rose Bowl if Georgia won.  She had called to confirm and give Kris the travel details.   Kris’ flight and hotel accommodations would be taken care of.  He would also be generously compensated for his time.  She even offered me a great deal on a flight to Pasadena.  No brainer? Right?  It was a once in a lifetime opportunity to see my Dawgs play in the Rose Bowl and to see the Rose Bowl parade. Let’s go!

The next morning, I was still feeling bad and out of my head.  I reconsidered my positive response.  We did not have tickets.  I understood the trip had been shortened from 5 days to 3 days.  I also understood that the hotel had changed from Santa Monica beach to Beverly Hills.  Hmm?  Kris was out-of-town on business.  I called him as he was getting in a cab to go to the airport to head home.  He was a little distracted.  Long story short, I thought he confirmed what I had understood.   Consequently, I told him to cancel my flight if he could.  Unfortunately, I later found out that I had misunderstood him and should have never cancelled my flight. 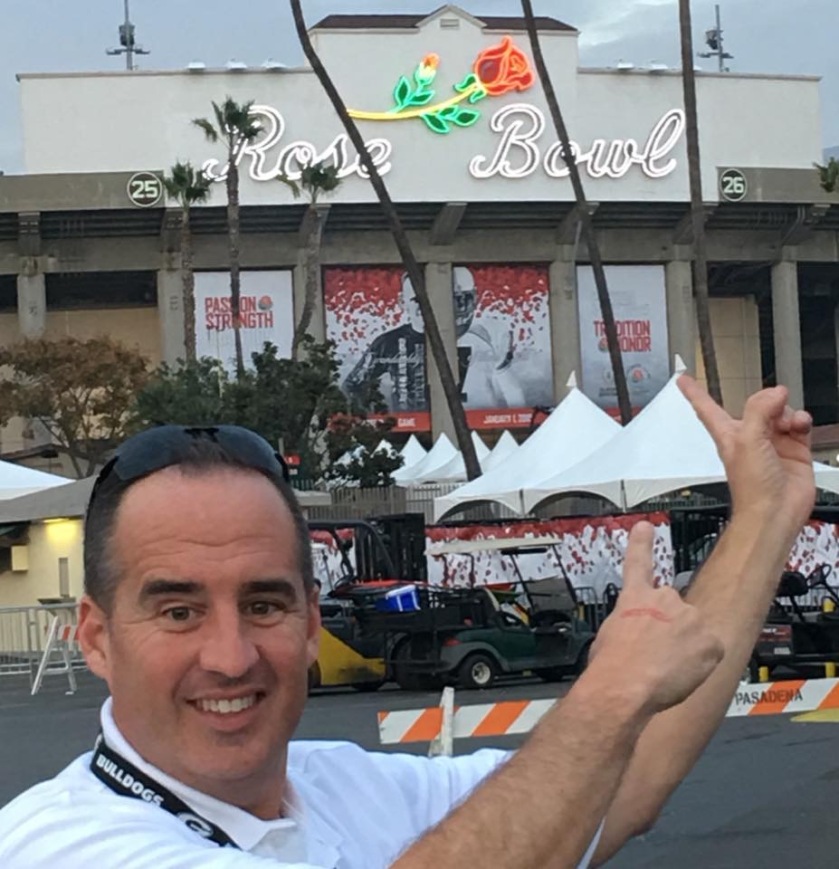 Later in the week, after Kris arrived in California, my oldest son called.  He informed us that he had us two tickets on the thirty yard line, Georgia side, for the Rose Bowl.  Needless to say, I didn’t get to attend.  I turned down a free room, a cheap flight and ultimately, tickets to one of the best football games ever.  I blame the food poisoning! 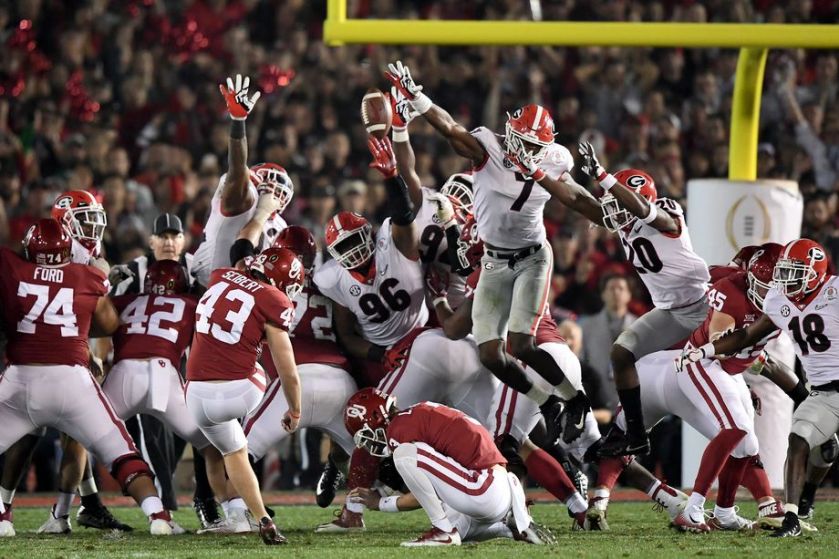 As soon as Georgia won the Rose Bowl in double over-time, I went online to search for tickets to the National Championship.  The upper level seats were going for about $2800 each and lower level tickets were at about $4000 a piece.  I resigned then that I probably would not be going to Atlanta.

It was one week until the National championship, all Georgia and Alabama fans were in a roar.  A Georgia friend texted and said she was looking for three tickets. This is what I texted her and her response: 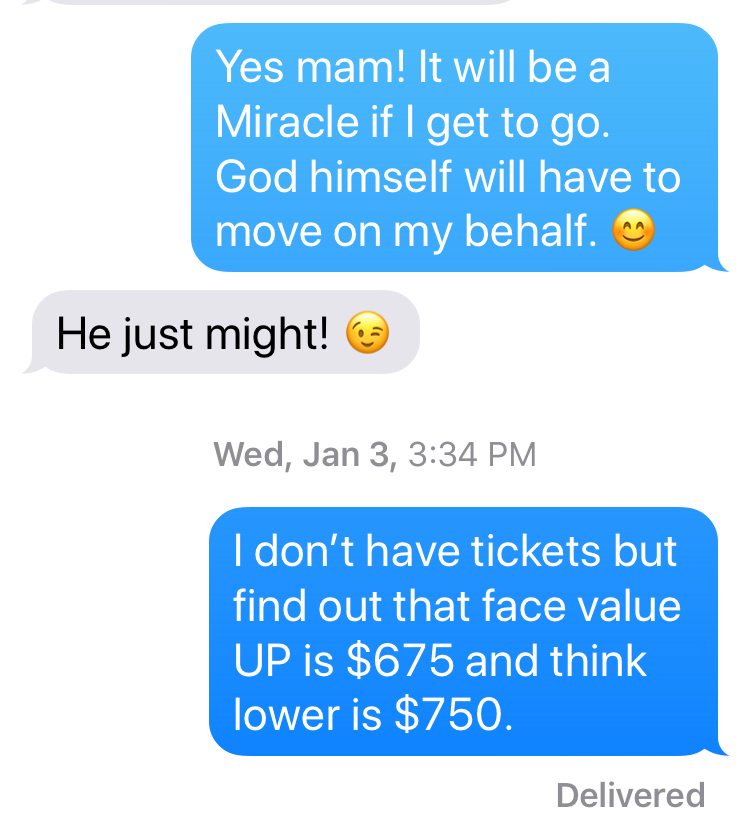 The week between the Rose Bowl and the National Championship ticked away.  Friday, January 5, came and went.  I still did not have a ticket and the game was on Monday, January 8.  I reasoned that I would not be attending the National Championship.  The family went out to dinner to celebrate my mother in law’s birthday.  When we pulled into our garage about 8:30 pm, Kris received several texts. I had a messenger message and an email.  These messages were all from our travel agent friend.  She apologized for the late notice.  She asked Kris to drive to Birmingham.  She wanted him to host a bus full of Alabama fans on a day trip from Birmingham to Atlanta to the National Championship.  She would pay him mileage to and from Birmingham, provide him a room after the game and compensate him.  AND…there was room for me!  I was elated.  I thought in my head, “I am going to the CHAMPIONSHIP and it is not going to cost me a dime to get there.”  Kris immediately said that he could not do it.  I sunk. Wait!  I thought.  Can I do it?  I have hosted many people through the University of  Tennessee and Austin Peay.  Can I do it?  He made the proposal to our friend and she said, “Of course, BUT…”

If I hosted and if I got a ticket, I would have to leave the game at the beginning of the fourth quarter no matter what!  I would have to be back at the bus to greet the Alabamians.

However, if I hosted and got a ticket, the host compensation would help pay for my ticket.  I also would have a ride essentially to the front door of Mercedes-Benz stadium.  My trip would be paid for.  I had a choice to make.  I had until Saturday morning to decide.

Decisions! Decisions. If I found a ticket and didn’t host the bus trip, I would have to pay for my ticket and my trip.  I would have had to find a place to park and then walked to and from the game alone.  One of my friends from college had her own miracle occur that allowed her entrance into the game.  She was asked at the last minute to chaperone a high school band that would participate in the pregame show.  I thought I could meet her once inside the game.  I thought we might could even ride together.  We could hang out.  I could stay for the whole game and trophy presentation.

This really should have been a no brainer.  However, Saturday morning came and I did not know what to do.  Leaving after the third quarter would be difficult.  I called my Mom and told her the story.  She asked me why I was even contemplating it.  She asked, “Don’t you see God in this?  You can record the game and watch the end at home.”  I came to the realization, “I am getting paid to go to the National Championship. I have a round trip ticket to the National Championship. Duh ?”   God was moving on my behalf.

After I talked to Kris, it was settled.  I WAS GOING TO THE ‘SHIP!  He laughed and said, “You did not know that you would have to go through hell (AL) to get there!”  I still did not have a ticket, but I figured if God could put this amazing adventure together, He could and would find me a ticket.

I posted this early Sunday morning before I went to church and left for Birmingham. 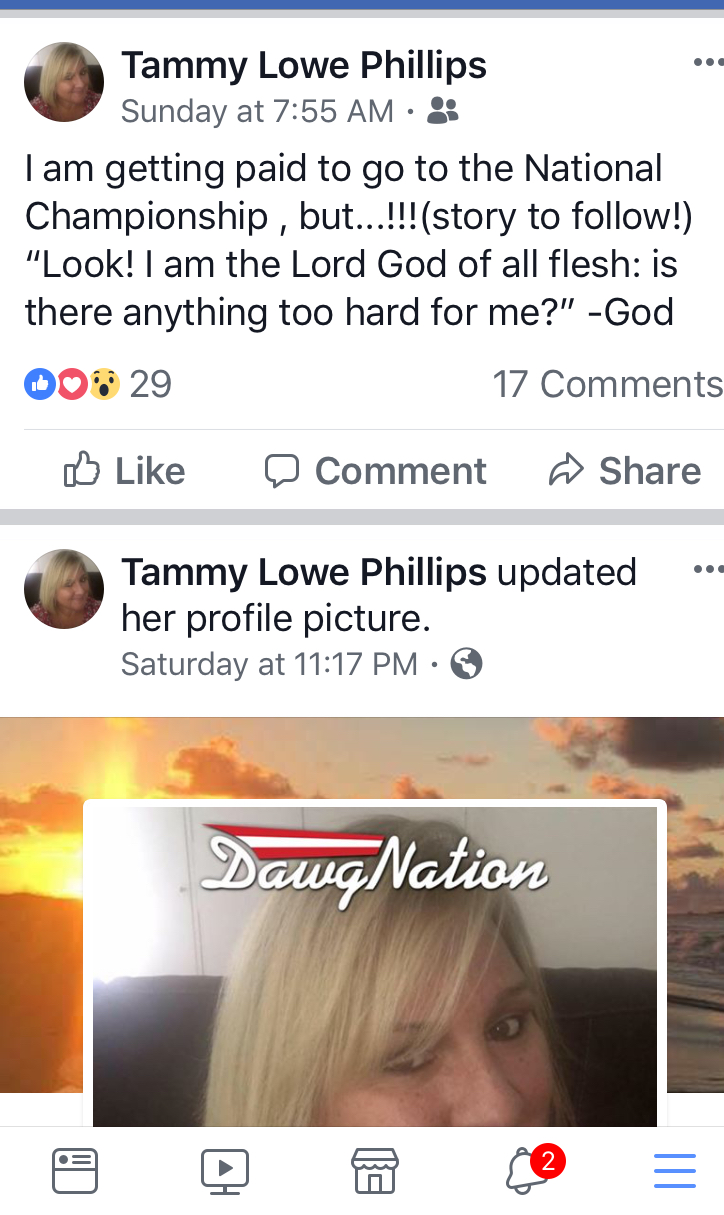 I breezed to Birmingham around 5 PM after a short shop at Cool Springs Galleria.  I enjoyed a gyro for dinner.  I happily checked into my hotel that was decorated in red(not crimson) and black.  I turned on a Hallmark movie and just chilled.  It wasn’t long after I settled into my room that I got a call from Kris:  “I think our “APSU/UGA/AL” friend has you a ticket.  He is confirming.  I believe it will be face value!’’

I was blown away.  Kris had been looking for a ticket for me all week, as well as Brayden.  Kris was not feeling well on Sunday, yet he was relentless in his efforts to find me a ticket.  He has a huge network and he worked it on my behalf.  I am grateful for my husband!  He gave me the contact information of my ticket broker.  Sunday night , I sent this text to our friend: 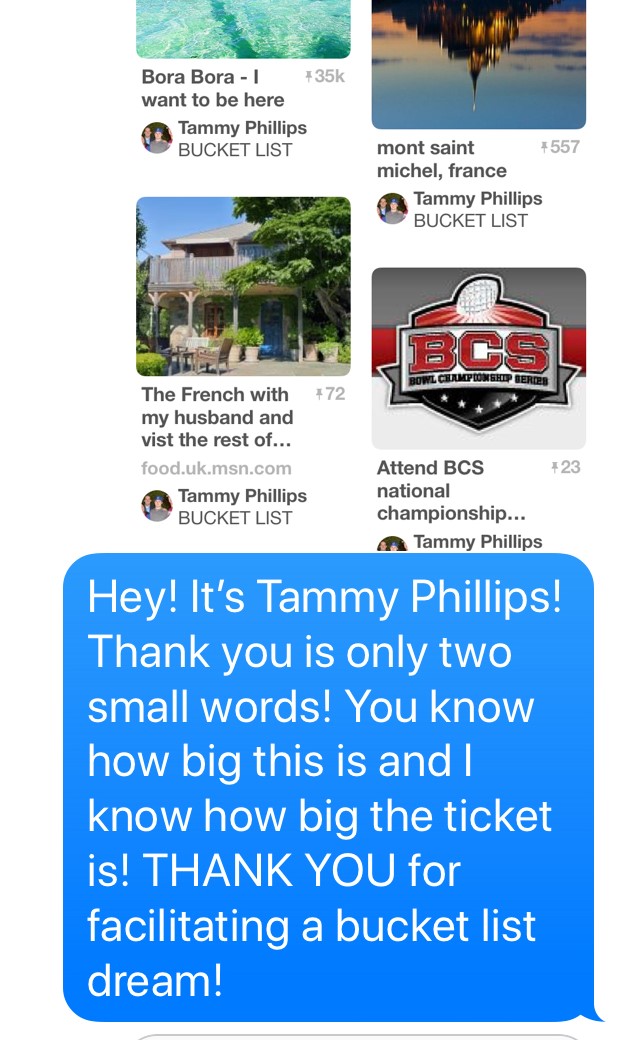 Monday morning, I awoke to this text from Kris: 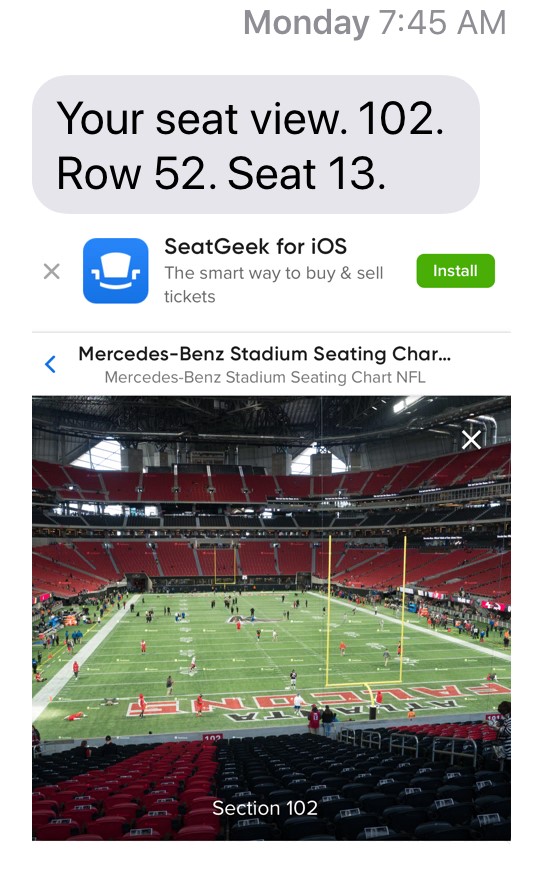 At 12:00 PM on Monday, January 8, I left Birmingham with fifty of my new ‘Bama friends on a charter bus headed to Atlanta for the National Championship and I had a ticket waiting on me at will call.  My heavenly Father moved on my behalf.  By the grace, unmerited, undeserved favor, of my God, I attended the 2018 CFP National   Championship. 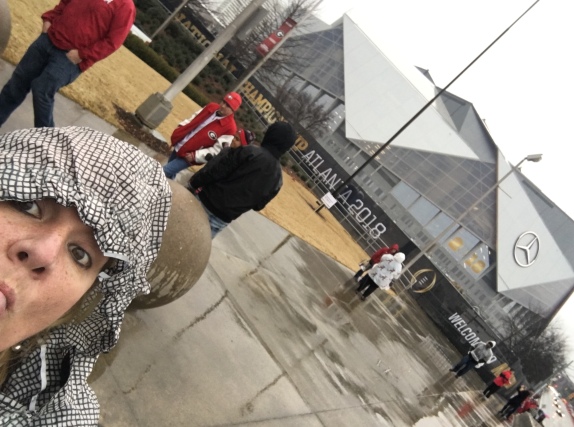 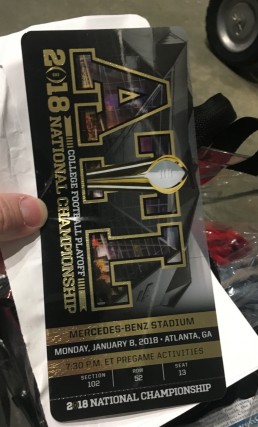 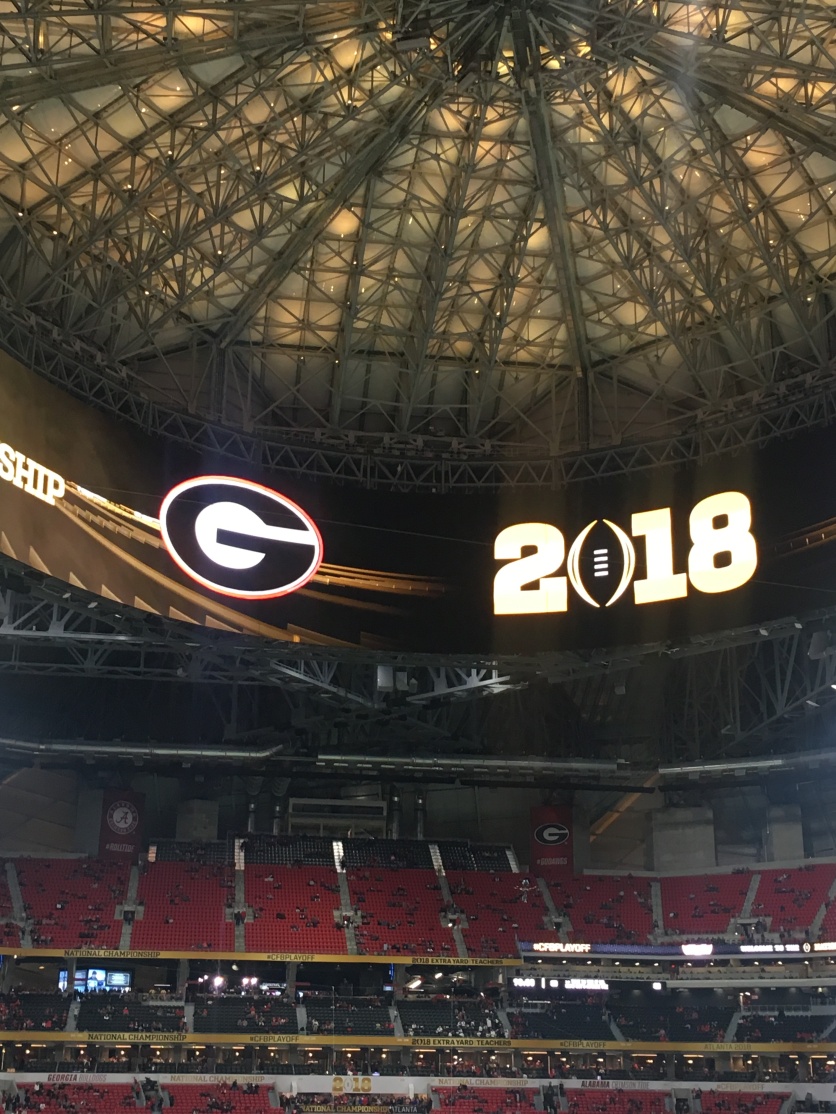 The first person I saw at the stadium that I knew was my favorite Redcoat, Mandy Gillis, Bobbe’s daughter. 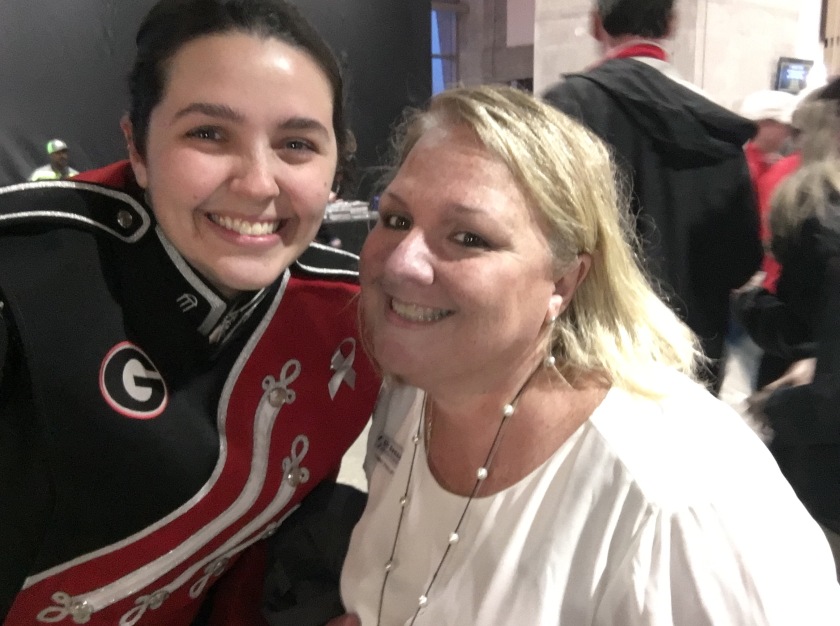 I watched Bobbe be a back-up singer for President Donald Trump while holding the corner of the huge American flag in the pregame show.  (She is standing on the bottom right side 25 yard line.) 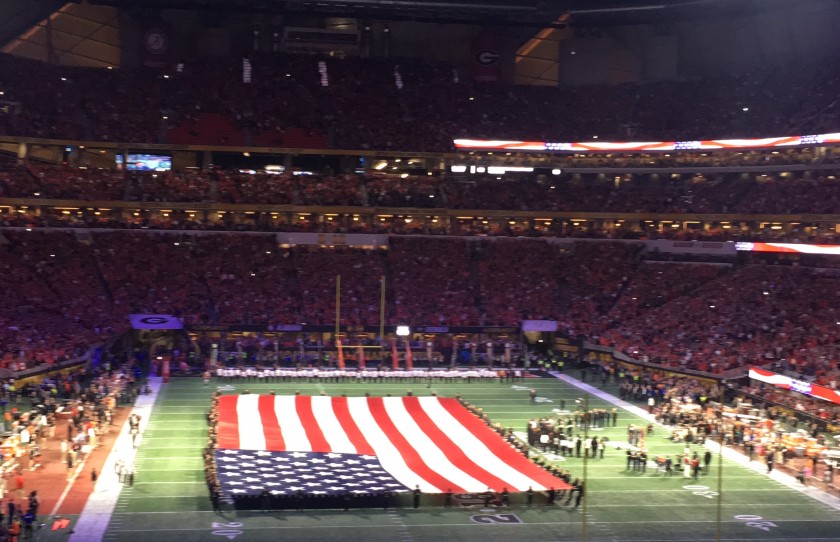 After pregame, there just “happened” to be one seat open beside me.  Bob joined me.  We missed our friend Pam, but we cheered on the ‘dawgs. 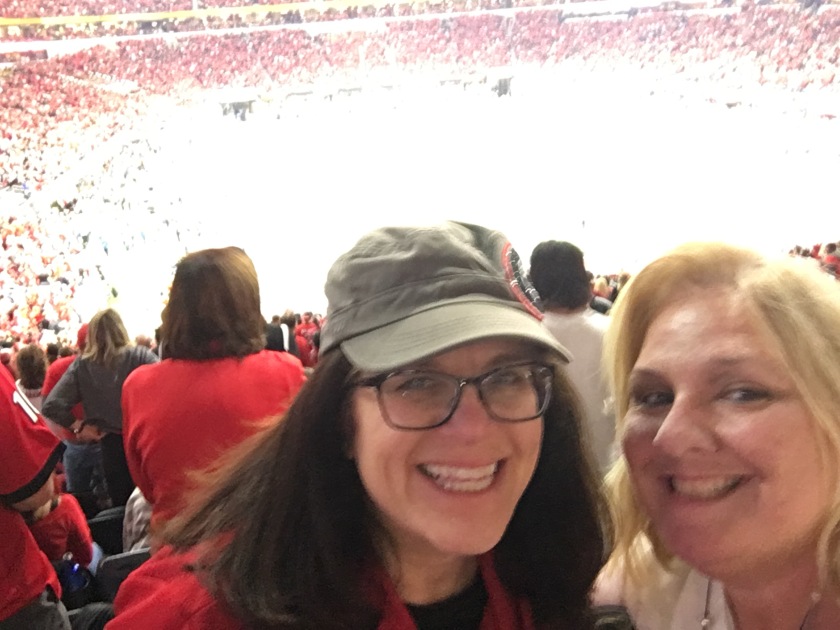 We watched them lead ‘Bama almost the whole game.  When I left late in the third quarter, the Tide had just scored with a new freshman quarterback, Tua Tagovailoa.  However, we came right back and scored.  When I sadly left the game, I believed that the University of Georgia Bulldogs would be the 2018 National Champs.  I thought it would be a long ride home for my ‘Bama friends.  After a fourth quarter comeback and an overtime win by Alabama that I still have not watched, my ‘dawgs were not able to bring home the trophy.

The best news at the end of the game was that the ‘Bama freshman quarterback who won the game for the Tide gave God all the glory!  He stated that all things are possible through Christ.  Both of our journeys to the National Championship game were courtesy of our heavenly Father.  After all, it was just a game, right? Ha. Ha. Ha.  It was the National Championship and Tua chose to give God the glory for the win before millions.  I choose to give Him the glory for all He is and has done, but today for planning my trip.  It was all Him moving behind the scenes on my behalf.  Thank you, Father! You are amazing!

One thought on “I Got Paid to Go to the 2018 CFP National Championship, but…”