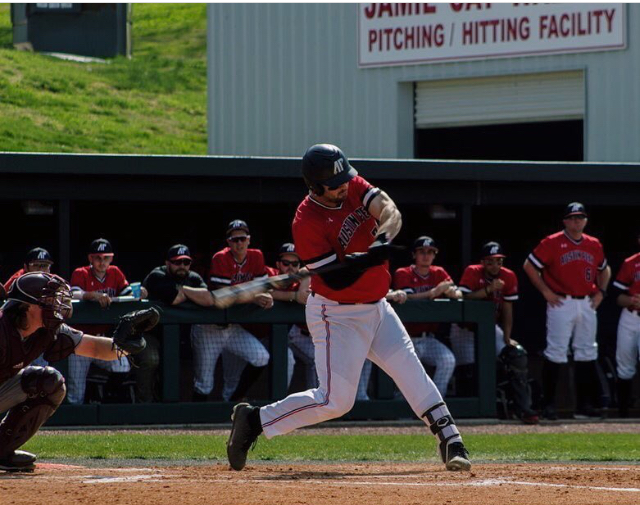 What a difference a week, a day, an hour, a minute, a second, a nanosecond makes! Extreme pain to extreme gain! Parker Phillips, our son, plays baseball for Austin Peay State University. Parker likes to compete and often chooses to play through the pain.  On Wednesday, April 4, 2018, his wrist was hurting so badly that he opted to miss the road trip to Southern Illinois. Instead, he visited the orthopedic clinic.  It was suggested that he had a small internal ganglion cyst, and that an MRI would be scheduled to confirm there was no further damage to his wrist. This was not a “Bible Bump” that we could hit with the physical Word of God, a Bible  and it would just disappear.  I hit it with the Word. My response was “Be healed wrist! Be healed!” This was not a statement I made lightly. I believed it.  Our pray warriors continued praying for Parker.

I trusted God’s word: “Believe on the Lord Jesus Christ and you shall be saved and your house.”-Acts 16:31. Parker is still a part of our house. The Greek word for saved is “sozo” which means to save, keep safe, sound, restore to health, be healed, be whole, be complete.  It is the same word used in John 3:17, For God sent not his Son into the world to condemn the world; but that the world through him might be saved.    I believed that God saves us in every situation if we ask Him and believe Him.  So, we prayed and believed for Parker to be healed.

Parker’s MRI was at 9:00 am on Friday, April 6th.  He was told the MRI would be read immediately and that he would get the results in route to the Belmont game.  He texted at 11:00 am to confirm that it was a cyst.  He said he was going to “see” how it felt during pregame batting practice.  The trainer called to answer my questions. I asked what was next.  She said that they would meet with orthopedic doctor on the following Tuesday to discuss options and pain management. She stated he was hitting well during BP, but that he would sit out the first game because it was still very painful.

At snowy game time on Saturday, April 7th, Parker’s wrist was the same. He did not start.  The third inning rolled around. I saw Parker pick up a bat like he was going to swing. This went on for a couple of innings.  I was puzzled.  It was not until the after the game that I found out the whole story.

During pregame, Parker was goofing off.  He hit his braced wrist on a team mates shoulder.  He felt excruciating pain.  His immediate thoughts were that it was broken, and he was done.  However, my God’s thoughts were “I know the plans I think for you, says the Lord, plans for peace (* whole, health, complete, sound) and not for evil (*bad, pain, worse than, worst; injury), to give you a future and a hope. 12 Then you will call upon me and come and pray to me, and I will hear you. 13 You will seek me and find me, when you seek me with all your heart.” -Jeremiah 29:11-13. In the third inning, he said his hand felt different.  He took off the brace and lifted himself off the bench with the wrist. He had not been able to do that before. He swung the bat. No pain. It was weak, but no pain. He told the Coach.  Coach shook his head at Park’s and sent him to the trainer.  The trainer said, “No way!” She put Parker through some tests and then instructed him do a push up.  He did push-up’s! His wrist was instantly healed. Parker was back in the line up the very next day.

For my thoughts are not your thoughts, neither are your ways my ways, says the Lord.9 For as the heavens are higher than the earth, so are my ways higher than your ways, and my plans than your plans.10 For as the rain comes down, and the snow from heaven, and returns not thither, but waters the earth, and makes it bring forth and bud, that it may give seed to the sower, and bread to the eater:11 So shall my word be that goes  forth out of my mouth: it shall not return unto me void, but it shall accomplish that which I please, and it shall prosper in the thing whereto I sent it. (Isiah 55:8-11)

God’s word says that Jesus “took the stripes on His back for our healing.”(Isiah 53 & 1 Peter 2:24) We prayed His word. He heard it. Parker was healed that day. We got our miracle.  Many will say whatever that was just a coincidence. His Word says, “…I am the Lord that heals you.” (Exodus 15:26) He also says, “For I am the Lord, I change not…” (Malachi 3:26). If you do not look for the miracles in your life that God grants every day, you will not see them.  You are missing out on a great God who loves you so much and has great plans for you, if you believe him.  I choose to give glory where glory is due. I loved God’s way of healing Parker. I liked it much better than man’s alternatives of medicine, shots or surgery.  See the miracle in the moment!

Now, let me tell you what a difference a week makes. One week, after Parker’s injury and healing, he had the day of a lifetime on the baseball field.  In a double header against Eastern Kentucky, he hit 5 home runs. He finished the three-game series 8-for-13 (.615 batting average) and 12 RBI’s.  He was named adidas® Ohio Valley Conference Player of the Week and Collegiate Baseball National Player of the Week. You can read about it here if you have not already. (http://www.letsgopeay.com/news/2018/4/16/baseball-phillips-nabs-ovc-national-honors-after-monster-week.aspx)

Don’t get me wrong, Parker works very, very hard. However, all glory goes to God for what happened last week.  He was injured, receive a nanosecond healing and then went on to have a career game all within one week.   Now unto him that is able to do exceeding abundantly above all that we ask or think, according to the power that worketh in us, 21 Unto him be glory in the church by Christ Jesus throughout all ages, world without end. Amen. -Ephesians 3:20-21